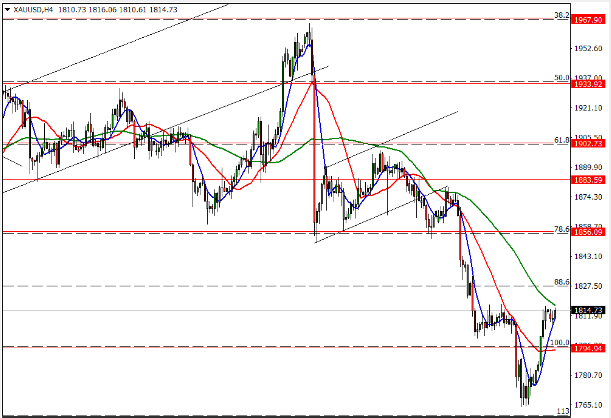 Futures contracts for gold prices fluctuated in a narrow range that tends to decline during the Asian session, overlooking the decline of the US dollar index to its lowest since April 26, 2018, according to the inverse relationship between them on the cusp of developments and economic data expected today, Wednesday, by the US economy, the largest economy in the world, which Includes testimony by Fed Governor Jerome Powell before the US House of Representatives Financial Services Committee.

Investors are currently awaiting the American economy to reveal preliminary data for the labor market with the release of the index of change in private sector jobs, which may reflect the acceleration of job creation to 433 thousand jobs compared to 365 thousand jobs last October, hours before the disclosure after Tomorrow, Friday, the monthly report on jobs other than agricultural and unemployment rates in addition to the average hourly income for the past month.

This comes before we witness the speech of Deputy Governor of the Federal Reserve and a member of the Federal Open Market Committee, Ratdal Quarles, about financial regulation at the Financial Times Global Digital Banking Conference, and before the second half of the actions of Federal Reserve Governor Jerome Powell about the “CARES” law before Congress, and that. Hours after yesterday, he delivered the first half of his testimony before the Senate Banking Committee.

We would like to point out that Powell yesterday warned lawmakers in Congress that the economy is still in a damaged and unconfirmed state, with his statement that recent news about the Corona vaccine is considered positive in the medium term, and he touched upon the continued recovery of economic activity despite the recovery being at a moderate pace and the pace of improvement in the market. Business is moderate too, adding that the current economic outlook is tinged with uncertainty and depends on the extent of the coronavirus outbreak.

Powell also touched during his testimony before Congress about the fact that the recovery of household spending H is due to the support provided by the Federal Reserve, explaining that the federal measures allowed the provision of $ 2 trillion in funding to support businesses, non-profit institutions and local governments, adding that the return of the high numbers of Corona sufferers is very worrying and that the Bank The Federal Reserve is committed to using all tools available to support the economy.

Gold price stabilized above 1805.00, but it faces strong resistance formed by the EMA50, which may push the price to provide some temporary bearish bias before returning to resume the bullish bias.

The price needs to obtain enough positive momentum to push trades to breach the level of 1818.00 to confirm the rush towards achieving more expected gains during the upcoming sessions, to continue suggesting the bullish trend, provided that the price maintains its stability above 1795.00, as breaking this level will pressure the price to return to the main track The downside again, while the next positive target is located at 1838.10.

HIGH RISK WARNING: Foreign exchange trading carries a high level of risk that may not be suitable for all investors. Leverage creates additional risk and loss exposure. Before you decide to trade foreign exchange, carefully consider your investment objectives, experience level, and risk tolerance. You could lose some or all of your initial investment. Do not invest money that you cannot afford to lose. Educate yourself on the risks associated with foreign exchange trading, and seek advice from an independent financial or tax advisor if you have any questions. Any data and information is provided 'as is' solely for informational purposes, and is not intended for trading purposes or advice. Past performance is not indicative of future results.
Contact us: [email protected]
60pips.com © 2022
Tel: +44-7520-631522
Email: [email protected]
Open chat
1
Welcome to 60pips.com
Hello
How may we help you?