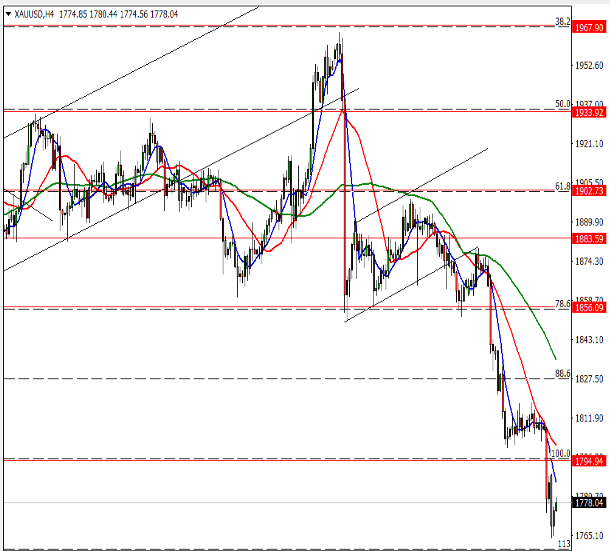 Gold price futures fluctuated in a narrow range tilted to a decline during the Asian session to witness the resumption of its rebound from its top since January 8, when it tested the highest for it since March 22, 2013, disregarding the rebound of the US dollar index for the second session from its top. Since October 10, according to the inverse relationship between them on the cusp of developments and economic data expected today by the US economy, which includes the launch of the activities of the semi-annual Governor of the Federal Reserve Jerome Powell in front of Congress.

Investors are currently awaiting by the US economy, the largest economy in the world, the launch of the activities of the semi-annual Governor of the Federal Reserve Jerome Powell before the Congress, where it is expected that Powell will present today the first half of his half-year testimony about monetary policy before the Financial Services Committee in the House of Representatives And that is before tomorrow, Wednesday, he will give the second half of his testimony before the Senate Banking Committee.

Markets are also looking ahead by the US economy for the release of a job readability statistic and job turnover that may reflect an increase to 6.93 million compared to 6.80 million in November, before we witness the speech of FOMC members Randall Quarles about Banking Connectivity in Connecticut, and Federal Reserve Bank of Minneapolis President Neil Kashkari speaks at the Montana Town Hall event.

Otherwise, investors are also closely watching what will come out of the ECB Governor Christine Lagarde’s talk about the European Central Bank’s annual report to the European Parliament in Strasbourg, before we also witness later in the day Bank of England Governor Mark Carney testimony before the Economic Affairs Committee of the Council The lords in London are hurting hours after the disclosure of growth data for the first quarter of the British economy.

On the other hand, doubts remain about how quickly Chinese factories return to work following the lunar New Year holiday in China, which has been extended as part of efforts to contain and combat the spread of the Coronavirus, which has killed at least 1,011 people, most of them in Wuhan, China. It is the epicenter of the coronavirus that has spread to at least 27 countries so far.

Gold price bounced slightly lower after touching the level of 1575.90, which indicates the importance of this level to the fate of the next destination, noting that we need to breach this level to confirm the extension of the upside wave towards 1611.20.

The stochastic is clearing its negative momentum and reaching the oversold areas in the sell, while the EMA50 continues to provide positive support for the price, to keep our expectations for the bullish direction in the intraday and short term unless the 1554.10 level and stability below it are broken.

Only $300 for lifetime membership